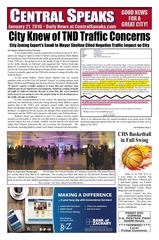 City Knew of TND Traffic Concerns City Zoning Expert’s Email to Mayor Shelton Cited Negative Traffic Impact on City Investigative Report by Dave Freneaux A November public records request has revealed an April 24, 2015, email (see image at right) in which Central’s zoning attorney Mark Balkin advised Mayor Junior Shelton that the traffic generated by the proposed Shoe Creek TND was “not going to serve the people living in the development or the traffic already on Sullivan” and suggested that “before final plan approval is granted for any part of the development” the Council should resolve the extension of Wax Road to Hooper Road.