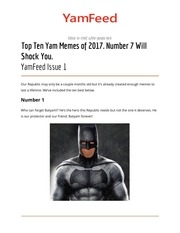 Editor-in-chief: u/the-potato-lord  Top Ten Yam Memes of 2017. Number 7 Will  Shock You.  YamFeed Issue 1    Our Republic may only be a couple months old but it’s already created enough memes to  last a lifetime. We’ve included the ten best below.  Number 1  Who can forget Batyam!? He’s the hero this Republic needs but not the one it deserves. He  is our protector and our friend. Batyam forever!            Number 2  Who said recruiting for the military needed to be boring? Not me! Propaganda has never  looked as Yammy as it did in these two recruitment posters.     Number 3  We can’t all have Yamborghini's but those who do can’t seem to stop showing them off.  We’re not complaining though! It’s a beautiful car afterall.    2        Number 4   In a great example of taking an existing meme and modifying it to fit our Republic we see a  great Yam memer demonstrating our military strength and humour.    Number 5   Here’s another example of adapting an existing meme. It’s great isn’t folks? I haven’t stop  laughing since I first saw it!     3        Number 6  At number 2 we had  posters for recruitment for the military and now at number 6 we have  a victory poster after a hard-fought campaign. Our troops are heroes and we honour them  all! Thank you brave Yams.    Number 7  Need I say more?    4        Number 8   Not just a great meme but also a great phone background. Absolutely brilliant!    Number 9  Great pic of a happy Yam scientists! Our scientists work hard and play hard!     5