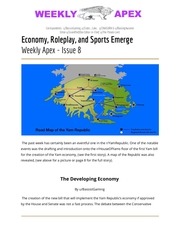 3         Members of the r/GreatFoodAlliance (GFA) gathered to remember the many great Yams  lost during that fateful war. The war began when an alleged Carrot bomb was planted at a  WASA site killing and injuring many scientists and destroying one of their rockets  preventing its launch. It was only after hundreds had died that we learned the Carrots were  framed, the true perpetrator is still unknown.    However, some scepticism arose from u/inspectoralex (see below) who argued that the  Carrot war is a conspiracy designed to prevent Yams leaving their homeland to live abroad.  u/Inspectoralex’s claims were quickly discredited by military and country leaders and by the  firsthand accounts of many war heroes.      This is not the first time u/inspectoralex has exhibited unpatriotic tendencies. In the past,  he has been  also attempted to destabilise peace efforts. While travelling abroad on a  diplomatic mission u/The-Potato-Lord attended a meeting within the r/FruitUnion offering  peace and cooperation between the r/YamRepublic and r/GreatFoodAlliance. Several Fruit  Union representatives present offered positive reactions the offer with some describing it  as “tempting.” In the midst of this, u/inspectoralex interrupted the meeting saying:  “I don't  personally trust anyone allied with the Yam Republic... there have been stirrings of a civil  war. There are too many political differences within the Yam Republic for them to be  beneficial in any alliance... you will be Yammed.” This comment attracted attention and the  peace discussion had to be postponed.   4         Reaction to u/inspectoralex has been divided though largely negative, u/ZAWGURN replied  “I beg to differ. Even through our political differences, our national strength and patriotism  will keep us together and strong!”   We have had no response to u/inspectoralex’s inflammatory language from the executive  branch however u/Bluy98888, eternal leader of the Republic did respond saying that “there  are no legal grounds to punish someone for being unpatriotic” and “from an ideological  position I do believe in freedom of speech (a constitutional right) and therefore would be  against any charges being levied against the poor Yam.” Questions about whether Inspector  Alex is a Yam citizen, or possibly even a GFA, or GFA affiliated (like Cocoa Bean Countries or  Pizza Republic) country are being raised by a number of citizens.   People are confused because even before his unpatriotic statements, he showed great  patriotism. This leads to an obvious question. Could he be a double agent?   Quoting BlastingAwesome, Cocoa Head Beantist and DeFacto leader, “whoever he is, he’s  bad news.”  First Ever GFA Soccer Match Ends in Draw  By u/Crater_Cake     Last night, thousands of Yams and a few Watermelons gathered into Yamsung stadium in  New Yam to watch the first soccer match in the history of the Great Food Alliance (GFA).  Yam Republic F.C. faced off against Watermelon Republic United. Just before the start of  the game, and every Yam and Watermelon in attendance stood up to sing the Yam  Republic’s national anthem. And what a glorious sight it was! Thousands of Yams and  Watermelons singing in harmony, demonstrating the strong everlasting bond of the GFA.     Players were called onto the pitch, one by one, up until the last Yam, the player every Yam  in attendance was waiting for, John Yamford. As he appeared out of the locker room, the  stadium instantly burst into applause. John Yamford, hailing from the great city of  Yamsterdam, grew up playing soccer on the docks of Yamshroom Bay. When he entered  high school, he played for his school’s team, one of the best in the northern part of the  5