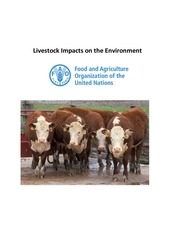 Spotlight Livestock impacts on the environment 100% 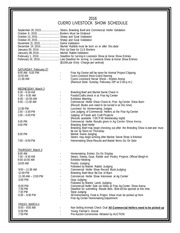 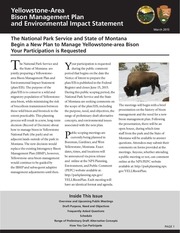 plan/EIS is to conserve a wild and During this public scoping period, the migratory population of Yellowstone- National Park Service and the State area bison, while minimizing the risk of Montana are seeking comments on of brucellosis transmission between the scope of the plan/EIS, including these wild bison and livestock to the the purpose, need, and objectives, the extent practicable. 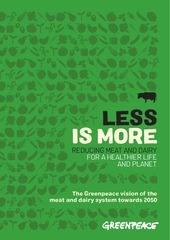 What Greenpeace means by ‘ecological livestock’ 42 Glossary Foreword Professor Pete Smith I have been working on the sustainability of agriculture and food systems for over 20 years, and over this time have been involved in hundreds of studies examining how to reduce the climate impact of agriculture, and how to make the global food system more sustainable. 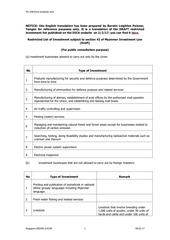 Restricted List of Investment subject to section 42 of Myanmar Investment Law (Draft) (For public consultation purpose) (a) investment businesses allowed to carry out only by the Union No Type of Investment 1 Products manufacturing for security and defence purposes determined by the Government from time to time 2 Manufacturing of ammunition for defence purpose and related services 3 Manufacturing of stamps, establishment of post offices by the authorised mail operator represented for the Union, and establishing and leasing mail boxes 4 Air traffic controlling and supervision 5 Piloting (water) services 6 Managing and maintaining natural forest and forest areas except for businesses related to reduction of carbon emission 7 Searching, testing, doing feasibility studies and manufacturing radioactive materials such as uranium and thorium 8 Electric power system supervision 9 Electrical inspection (b) investment businesses that are not allowed to carry out by foreign investors No Type of Investment Remark 1 Printing and publication of periodicals in national ethnic groups’ languages including Myanmar language 2 Fresh water fishing and related services 3 Livestock Singapore.582950.1/SCHP Livestock that involve breeding under 1,000 units of poultry, under 50 units of herds and cattle and under 100 units of 1 08.02.17 For reference purposes only sheep, goats and pigs 4 Processing, manufacturing and sale of animal products 5 Manufacturing and sale of animal feed 6 Establishment of inspection and maintenance sites for animals (Department of Livestock and Veterinary shall inspect animals and issue the permit) 7 Establishment of home for pets 8 Forestry products manufacturing from natural forests, forest areas and land manageable by the government 9 Searching, prospecting and doing feasibility studies for small and medium scale mineral manufacturing and manufacturing subject to mining law 10 Hand-scooped petroleum services up to 1,000 feet depth 11 Printing and publishing of visa stickers and foreign resident certificates 12 Searching, prospecting and manufacturing jade and gems 13 Sending patients to hospitals in foreign countries 14 Tourist guide business 15 Mini market and convenience store (c) investment business allowed only in the form of joint venture with any citizen owned entity or any Myanmar citizen No Type of Investment Restriction 1 2 3 1 Printing and publication of newspaper in foreign languages 2 Factory business that manufacture fishing nets Singapore.582950.1/SCHP 2 Business will be carried out subject to the law, procedures, orders, instructions, rules and regulations issued by 08.02.17 For reference purposes only Department of Fishing. 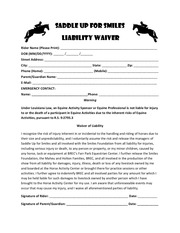 I further release the Smiles Foundation, the Maheu and Holton Families, BREC, and all involved in the production of the show from all liability for damages, injury, illness, death or loss of any livestock owned by me and boarded at the Horse Activity Center or brought there for practice sessions or other activities. 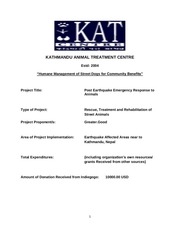 The KAT Centre Rescue team realizes that there was a huge need for life saving veterinary work for street animals, companion and livestock. 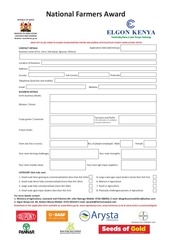 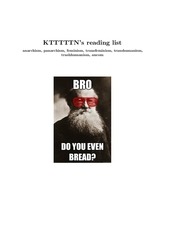 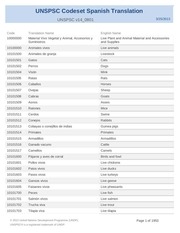 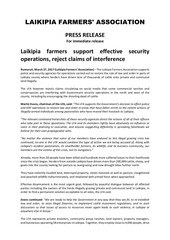 "The LFA supports the Government's decision to effect police and KDF operations to restore law and order in areas that have fallen victim to the violent actions of illegally-armed individuals among pastoralists who have moved their livestock to Laikipia. 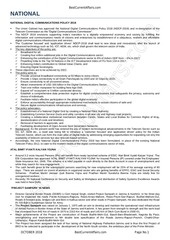 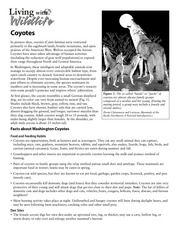 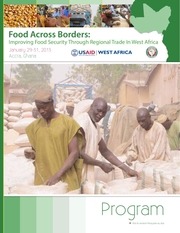 Now, in 2013, food security and economic growth, two keystones of resilience, will be realized only if the many constraints to free movement of the region’s staple commodities—livestock, maize, millet, sorghum, cowpea, onions, and others—are lifted. 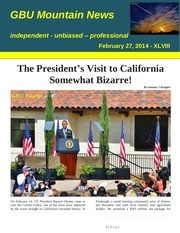 Starting in April, Central Valley ranchers will be able to apply for $100 million in livestock disaster assistance funding. 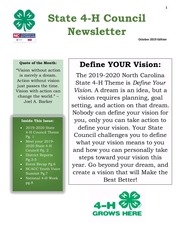 Anson county has also been preparing for the livestock show on August 31st, make sure if you're in the area to attend to see all the beautiful livestock. 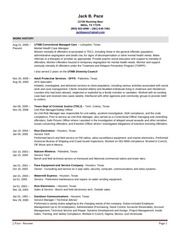 Introduction Antibiotic resistance is an ongoing threat to our health from the overuse of the drugs, especially on the livestock of the agricultural industry. 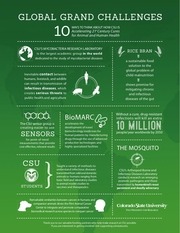 Inevitable contact between humans, livestock, and wildlife can result in transmission of infectious diseases, which creates serious threats to public health and agriculture RICE BRAN &gt;&gt;&gt; 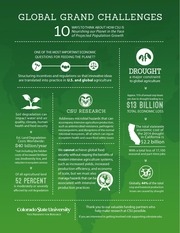 Soil degradation can impact water and air quality, climate, human $13 Billion Globally, 44% of the total crop and livestock production losses are caused by drought Thank you to our valuable funding partners who help make research at CSU possible. 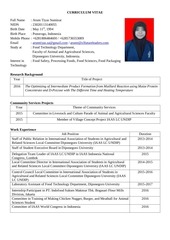 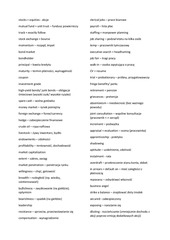 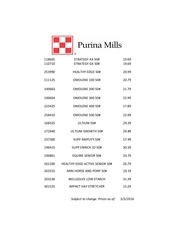 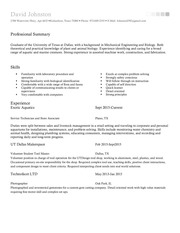 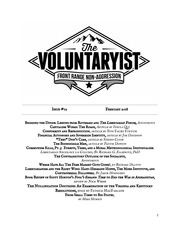 The Roads, Article by Insula Qui    All  people  of  all  political  denominations  follow  a  sort  of  road-cult.  Whenever  the  privatization  of  roads  is  proposed,  they  become  shocked.  Public  roads  have become a  sort  of  idol  for  the  modern  man.  Without  public  roads,  there  would  be  no  civilization.  Roads  are  the  thin  gray  line  that  separates  man  from  anarchy.  Because  of  this,  it  is  important  to  demonstrate  how  roads  can  be  privatized  without resulting in the collapse of  civilization.    First,  we  need  to  realize  that  the  way  roads  are  currently  run  is a form of socialism: roads  are  publically  owned  by  the  government.  Roads  are  a  nationalized  industry.  If it is true  that without the state there could be no roads,  it  should  also  be  true  that  without  the  state,  there  can  only  be  starvation.  If  the  roads  are  too  complicated  to  be  handled  by  private  individuals,  then  how  could  anyone  even  dream of producing a pizza on the market?     To  make  a  pizza  one  needs  to  cure  meat,  ferment  milk,  grind  and  spice  tomatoes,  produce  a  dough.  All  of  these  steps  have  infinite other steps. To cure meat one needs to  herd  livestock,  which  needs  to  be  fed  and  maintained.  Then  the  livestock  also  need  to  be  butchered  and  processed,  which  requires  the  technology  to  butcher  and  process  livestock.  Then  that  technology  needs  metal,  which  must  be  mined.  And  the  mining  of  metal  needs  tools  in  order  to  mine  metal.  Those  tools  need  electricity  to  function  efficiently.  The  complication  of  producing  a  pizza  is  infinite,  far  too  complex  for  anyone  outside the state.    Thus  logically  the  nationalization  of  roads  should  also  imply  the  nationalization  of  all  pizzerias  so  as  to  prevent  a  tremendous  scarcity  of  pizza.  But  even though the market  is logically unable to produce pizza, the     3 market  can  still  produce  bread.  However,  there  is  no  alternative  to  roads.  These  complicated  marvels  of  engineering  are  irreplaceable  and  irreplicable.  There  is  no  way  a  market  system  can  ever  produce  something  so  complicated.  Road  must  be  the  exclusive domain of the central planner.    And  even  though  the  central  planners  are  brilliant,  even  they  often  fail  at  maintaining  roads,  as  evidenced  by  the  constant  lack  of  road  maintenance.  If  even  the  government  can’t  do  anything  about  potholes,  then  it  is  impossible  that  a  private  individual  could.  If  the  government  cannot  keep  and  maintain  roads,  then  how  can  it  be  expected  that  any  company  ever  would.  Furthermore,  if  roads  were  privatized  we  would  all  have  to  go  through twenty toll booths to cross the street.    But  we  cannot  concede  this  point.  The  fact  that  the  government  fails  at  maintaining  roads  does  not  necessarily  imply  that  roads  cannot  be  maintained.  We  have  to  consider  the  other  perspective.  It  could  be  that  the  government  simply  has  no  incentive  to  maintain  the  roads.  This crucial thin grey line  is  neglected  by  the  government.  The  system  of  roads  is  not  properly  maintained  and  the  state  has  abandoned  the  roads.  If  the  roads  are  such  a  vital  part  of  the  economy,  it  could  be  that  we  need  to  privatize  them  to  keep  them  from  the  abuse  they  receive  at  the  hands of bureaucrats.    And  it  also  just  may  well  be  that  the  argument  about  toll  booths  is  disingenuous.  It  could  be  that  having  thousands  of  toll  booths  everywhere  may  result  in  at  least  a  minor  loss  of  revenue. Maybe there are better  ways  to  charge  money  for  the  use  of  roads.  The  strategies  of  subscription services, digital  tracking, and automatic tolls come to mind.    Furthermore, it might also be true that roads  are  not  the  most  complex  marvel  of  engineering.  It  could  be  true  that  people  without  the  boundless  wisdom  of  the  central  planner  can  actually  maintain  and  build  the  roads.