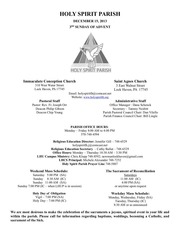 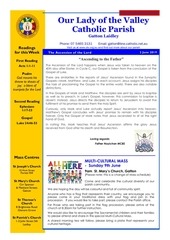 Our Lady of the Valley Catholic Parish Gatton Laidley Readings for this Week First Reading Acts 1:1-11 Psalm God mounts his throne to shouts of joy;

D”Hereaux (parish priest of Our Lady of Mt Carmel, Carapichaima) for “provoking” us into treating God as a Father. 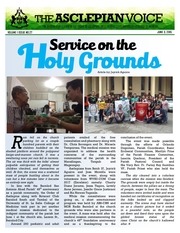 In line with the Bacolod San Antonio Abad Parish’ 48th anniversary as a parish community, the Order of Asclepius along with Rotaract Club Bacolod South and Tambal of the University of St. 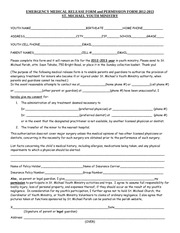 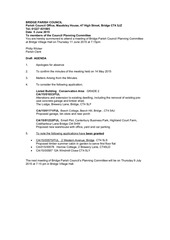 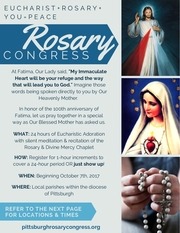 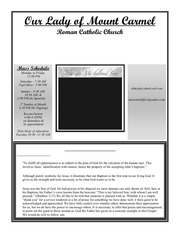 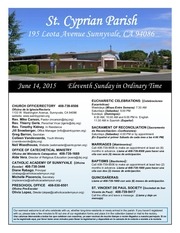 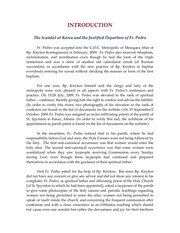 INTRODUCTION    The Scandal at Karea and the Justified Departure of Fr. Pedro      Fr.  Pedro  was  accepted  into  the  G.O.C.  Metropolis  of  Mesogaea  (that  of  Bp. Kirykos Kontogiannis) in February, 2009.  Fr. Pedro also received rebaptism,  rechrismation,  and  reordination  even  though  he  had  the  form  of  the  triple  immersion  and  was  a  cleric  of  another  old  calendarist  synod  (of  Russian  succession),  in  accordance  with  the  new  practice  of  Bp.  Kirykos  to  baptize  everybody  entering his  synod  without checking the manner  or form of  the first  baptism.        For  one  year,  Bp.  Kirykos  himself  and  the  clergy  and  laity  of  the  metropolis  were  very  pleased  in  all  aspects  with  Fr.  Pedro’s  confession  and  practice.  On  15/28  July,  2009,  Fr.  Pedro  was  elevated  to  the  rank  of  spiritual  father – confessor, thereby giving him the right to confess and advise the faithful.  (In  order  to  verify  this  event,  two  photographs  of  his  elevation  to  the  rank  of  confessor are found in the list of documents on the website.) On 19 September/2  October, 2009, Fr. Pedro was assigned as rector (officiating priest) of the parish of  St.  Spyridon  in  Karea,  Athens.  (In  order  to  verify  this  fact,  the  certificate  of  his  appointment as parish priest is found on the list of documents on the website.)      In  the  meantime,  Fr.  Pedro  noticed  that  in  his  parish,  where  he  had  responsibility before God and men, the Holy Canons were not being followed by  the  laity.    The  first  anti‐canonical  occurrence  was  that  women  would  enter  the  holy  altar.  The  second  anti‐canonical  occurrence  was  that  some  women  were  scandalized  when  they  saw  laypeople  receiving  Communion  every  Sunday  during  Lent,  even  though  these  laypeople  had  confessed  and  prepared  themselves in accordance with the guidance of their spiritual father.        First  Fr.  Pedro  asked  for  the  help  of  Bp.  Kirykos.    But  since  Bp.  Kirykos  did not have any concern or give any advice and did not show any interest in his  complaint, Fr. Pedro, as spiritual father and officiating priest of the Holy Church  [of St. Spyridon to which he had been appointed], asked a layperson of the parish  to  give  some  photocopies  of  the  holy  canons  and  patristic  teachings  regarding  women  not  being  permitted  to  enter  the  altar,  women  not  being  permitted  to  speak or teach inside the church, and concerning the frequent communion after  confession  and  with  a  clean  conscience  as  an  Orthodox  teaching  which  should  not cause even one scandal but rather the devoutness and joy for their brethren  in  Christ  who  received  the  Lord.  (The  photocopies  which  the  layperson  distributed with the blessing of Fr. Pedro can be found among the documents on  the website.)      As  a  reaction  to  the  above,  on  the  Sunday  of  the  Veneration  of  the  Holy  Cross,  Bp.  Kirykos  sent  his  FIRST  BLASPHEMOUS  LETTER  to  Fr.  Pedro,  in  which Bp.  Kirykos preaches at least five heresies. (A scan of this letter is found  on the list of documents on the website). After a few days Fr. Pedro asked a lay  theologian to telephone Bp. Kirykos and explain to him his doubt concerning the  letter.  But once Bp. Kirykos was informed that his letter was blasphemous and  heretical, Bp. Kirykos  began frantically  screaming  “Stop  talking!   Stop talking!”  The  next  day  Fr.  Pedro  received the  SECOND  BLASPHEMOUS  LETTER  of  Bp.  Kirykos,  in  which  he  dares  to  call  the  photocopies  from  the  Rudder  and  the  writings  of  St.  Basil  which  were  handed  out  at  St.  Spyridon’s  parish  as  supposedly  containing  an  “unorthodox  mindset!”  (A  scan  of  this  letter  by  Bp.  Kirykos  is  found  on  the  list  of  documents  on  the  website).  Two  days  later  Fr.  Pedro sent his FIRST RESPONSE to Bp. Kirykos, which Bp. Kirykos still has not  responded  to  even  though  several  weeks  have  passed.  (A  scan  of  this  letter  by  Bp. Pedro can be found on the list of documents on the website).      Bp. Kirykos invited Fr. Pedro to defend himself at a clerical meeting of the  Metropolis  but  he  forbade  the  presence  of  Fr.  Pedro’s  interpreter,  Mr.  Christos  Noukas.  This forbiddance is anti‐canonical because Bp. Kirykos cannot invite a  priest  to  defend  himself  at  a  meeting  without  the  priest  having  the  means  to  express his positions (Fr. Pedro is of Brazilian descent and requires a translator to  communicate in Greek).      Fr. Pedro, seeing then that Bp. Kirykos was using a Caesaro‐Papist tactic,  renounced  him  because  of  his  many  heresies  and  departed  to  another  old  calendarist  synod  in  which  he  finds  more  seriousness  towards  the  Orthodox  dogmas  and  teachings,  while  in  the  person  of  Bp.  Kirykos  he  saw  a  very  small  amount  of  seriousness,  if  not  complete  negligence.  (Proof  of  the  authenticity  of  the above can be found among the documents on the website.) 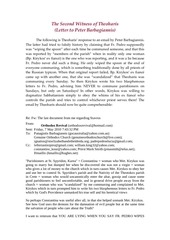 The Second Witness of Theoharis  (Letter to Peter Barbagiannis)      The following is Theoharis’ response to an email by Peter Barbagiannis.  The  latter  had  tried  to  falsify  history  by  claiming  that  Fr.  Pedro  supposedly  was “wiping the spoon” after each time he communed someone, and that this  was  reported  by  “members  of  the  parish”  when  in  reality  only  one  woman  (Bp. Kirykos’ ex fiancé) is the one who was reporting, and it was a lie because  Fr.  Pedro  never  did  such  a  thing.  He  only  wiped  the  spoon  at  the  end  of  everyone communing, which is something traditionally done by all priests of  the  Russian  typicon.  When  that  original  report  failed,  Bp.  Kirykos’  ex  fiancé  came  up  with  another  one,  that  she  was  “scandalized”  that  Theoharis  was  communing  every  Sunday.  So  then  Kirykos  wrote  his  two  blasphemous  letters  to  Fr.  Pedro,  advising  him  NEVER  to  commune  parishioners  on  Sundays,  but  only  on  Saturdays!  In  other  words,  Kirykos  was  willing  to  dogmatize  Sabbatianism  simply  to  obey  the  whims  of  his  ex  fiancé  who  controls  the  parish  and  tries  to  control  whichever  priest  serves  there!  The  email by Theoharis should now be quite comprehensible:       Re: 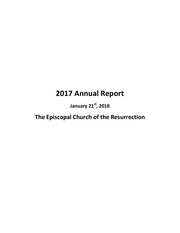 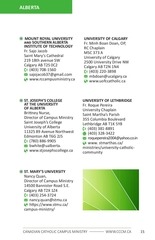 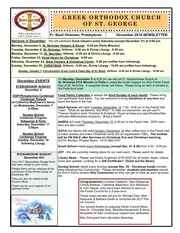 Nicholas OCA Mission in Pella to celebrate Great Vespers for their Parish Feast Day of St. 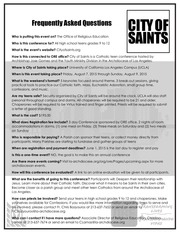 A Parish can sponsor their teens, or collect money directly from participants. 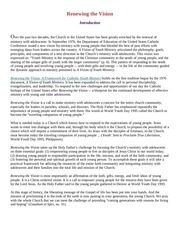 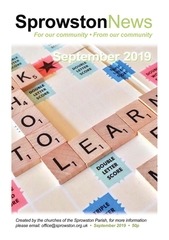 Summer has been great in our parish and here are a few highlights. 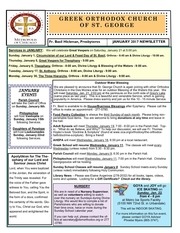 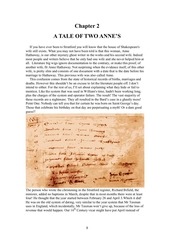 Well John Bretchgirdle was the vicar in 1564, plus the year/month before and he did write it in the parish register. 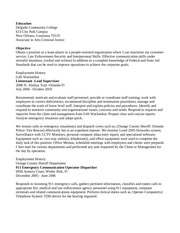 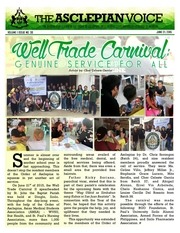 John the Baptist Parish was held at Dingle, Iloilo.