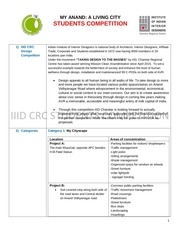 Vaishali Shah's Journey to the Land of Mahaprabhuji 74%

INDIAN SITAR BY WESTERNERS It is always very amusing to enjoy Indian musical instruments by westerners  who really try to put efforts to play those difficult strings together. Recently  Vaishali  Shah  attended  such  event  in  Nehru  Center  in  London  where  three  Europeans played very good sitar, ghunghru, Arabic drums etc.  They  did  a  good  justice  to  the  instruments,  taal,  Soor  and  tempo  of  the  melodies they created on stage. It is very difficult for her to appreciate any  westerner attempting to play Indian instruments as for us it is an attempt to  connect with god and not just create random music.  She  still  appreciates  their  efforts  and  music  they  created  and  entertained  relatively a good audience.  IN THE LAND OF  MAHAPRABHUJI Champaran  has  become  historically  famous  for  the  first  ever  satyagraha  march led by Mahatma Gandhiji which  put  the  place  firmly  in  the  independence  struggle  of  India.  Champaran  is  also  a  spiritual  hotspot.  It  is  famous  as  the  birthplace  of  Shri  Vallabhacharya  known  as  Shree  Mahaprabhuji.  Mahaprabhuji  lived  in  the  fifteenth  century  in  Champaranya  near Raipur in present day Chattisgarh.  He  is  the  founder  of  the  Vallabh  sect  known  as  Pushti  marg.  His  birth  was  itself a miracle.

If you encounter any problems, please contact RAJEN VALLABH on 082 771 9461, preferably on WhatsApp.